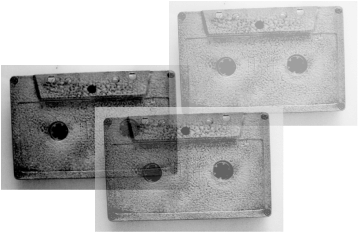 Tape format is the best way I found to know some underground bands and achieve their releases without going bankrupt. It's a great source of musical knowledge alongside with paper 'zines.

Some tapes are available for trading. I'm looking for some black/doom/death metal tapes and/or zines. For sales please check Dead Paradigma distro at discogs.

Raw BM in the traditional vein. Bad production but listenable. Who wants clean sound on this kind of releases anyway? The music doesn't bring nothing new but it's competent. Concerning Vorkuta I really like when I can listen to a clean bass sound on black metal. It doesn't make the sound less evil but it clearly defines it. Vorkuta give some riffage and ambiance very evil and pleasing. Aggressive and intense.
LINKS:
HELL
VORKUTA

This is that kind of BM tapes that you must buy. Still available in your obscure online distro. I always loved the skill of Vulturius. He's one of the great ones behind Portuguese BM scene among Nocturnus Horrendus or Gonius Rex. Not much to say about this release: if you're into raw BM, very intense and creepy compositions with a feeling that enthralls you, then this release communicates its purpose.
LINKS:
FLAMMA AETERNA

Well well, no presentations for this one. I usually don't make presentations really... Bought this when Moonspell where achieving an amazing degree of fame (national and international). I always loved their early roots, the black metal roots that, in this release, where opening the path of a creative musical genius. I just stick with the first Moonspell releases and specially Anno Satanae. Raw and juvenile genius stuff...
LINKS:
MOONSPELL

Strong dead jew imagery in a concentration camp. Images of the artists posing. A text about somewhat necrophiliac pleasures: a passion for suffering and sensual attraction towards death. The production is not so good but that doesn't chock me, I'm indifferent to it except when it's ridiculous bad sound. This tape didn't fill my listening needs. And really, I'm an undeniable lover of French BM scene. I recommend it for a start in Celestia black arts though.
LINKS:
CELESTIA

This tape is all in German and it comes with a nice bw printed booklet with German lyrics/poems and I am so useless with this... After a wonderful intro, it blasts as hell with nice riffs that would work good in a live show. I can barely listen to the vocal work at first. What stood out is how these musicians added such rhythm and such ambiance through the songs. It's black metal with a very particular feel. Somewhat after Fleish zu Feuer... I was expecting more, musically. Anyway, get this one. Dig the concept as much as you can.
LINKS:
ERHABENHEIT

This is a solo project of dark ritual ambient by Sethon. It is dedicated to "Ancient Hellenic Cosmogony" based on the Pythagorean Oath of Tetraktys. You need to be in the mood to get into this one. It's ritual music with an electronic basis, so don't expect much variation. Sounds like a very personal and conceptual work.
CONTACTS:
tetraktys @ hypervorea.net
tanhu @ warrior.hu

A WOLFTHORN
1. Spiritual Supremacy
2. The Lost Soul's Sacrifice
3. In His Name, for His Glory
B ERHABENHEIT
1. Künder des Untergangs
2. Vom Kreisen der Geier

Raw BM. Nothing new but if your tastes are into it you will definitely like it. Grim guitars and pure evilness, slow or fast paced, you get it all here. Erhabenheit side is the most intense with decent vocal work.
LINKS:
WOLFTHORN
ERHABENHEIT

Aggressive great guitar riffs, intense vocal work, misanthropic as much as satanist. Raw and ugly. This album has great playing and is one of my favorites. I'm very fond of Irae's work, it brings me that kind of sound that I was waiting for. Total hate with somewhat melodic feel in that whole sonic filthiness. A must-have.
LINKS:
NIGHTREALM
IRAE

There are riffs that exist only to fill some space. Otherwise, fortunately, it doesn't happen all the time.  Evilwinged are raw and grim BM entity bringing us a misanthropic message. There is some dissonance in the guitar lines that pleases me. Concerning the voice I don't have much to say. It's monotonous.  Nice hopeless moments worthing your attention.
LINKS:
EVILWINGED

1. The Triumph of Pagan Beliefs
2. The Dawn of the New Empire
3. Uralten
4. Broken Cross
5. The Spirit of Ancient Europe
6. The Temple of Infernal Fire
7. Black Hateful Metal
8. Millennium of Disgrace
9. After the Battle

I always had a thing about Veles. The songs are a bit short but it gives dynamics to this desirable tape. Very bad production. The guitars are scratchy and the drums sound just too near you and without definition. Some ambient and gloomy sounds filled with loneliness add much more to this album than just the distortion that we are used to.
LINKS:
VELES

This is Portuguese band Merihim, mostly from the mind of Balguelk, with some collaborations (K. Daemon, Nefastus, Vulturius, among others). A black metal album with lyrics written in Portuguese. It's a pleasure because it's something I'm not used to. The intensity is no different from English spoken bands. Being sung in native language is a must but this type of black metal is not quite good defined in terms of composition. There's something that needs to be worked out in the end.
LINKS:
MERIHIM

"Funeral Drone" is what it's written on the tape cover. So expect synthesizers playing desolate music for desolate days. I can perceive that this work is experimental parts. It creates a very strong ambience that sometimes catches your attention. For the most part of the listening time the sounds are clean and with a controlled playing. No risks taken.
LINKS (didn't find any, so go to the distribution):
PERVERSE MISANTHROPIC

Kult is a Portuguese solo act created by the twisted mind of Raven B. I must confess that with Kult I made my first incursions into noise/PE music so this project will always be close to me and will always be a reference. This tape is not one of my favorite works but you get all the Kult feel here - noise, power electronics,  industrial touches with passion and intensity all over it. Some harsh vocals and samplers. A must for any lover of this art.
LINKS (Kult is dead, so check this one):
THE SYNDICATE