Some musical creations still in its beginnings. Collaborations, compilations and anything that comes up...

Under the Activation Congress wing I was playing some semi-improvisation at the I Can't Sin Festival. It went good and pretty much analogue...
Follow the Bandcamp link and you'll know the other participant artists.
Latest improvisations with bass are originating the Bassworks I'm currently working on. Available at Bandcamp.

The ghosts they swarm. they speak as one person: a third black circle halloween compilation

Halloween compilation from 2013, published by Black Circle Records.
Bird Paradigma created the track Shroud. You can listen and download for free on the link below.

«On Wednesday July 25, 2012, the FBI conducted a series of coordinated raids against activists in Portland, Olympia and Seattle. They subpoenaed several people to a special federal grand jury, and seized computers, black clothing and anarchist literature. This comes after similar raids in Seattle in July and earlier raids of squats in Portland.
The warrants served specifically listed "anti-government or anarchist" literature as evidence to be seized.
At the time of this writing, November 2, two of the subpoenaed activists, Matt Duran and Kteeo Olejnik, are in prison at the SeaTac Federal Detention Center on civil and criminal contempt for their refusal to cooperate with the US government's persecution of dissidents. On November 9, Matthew “Maddy” Pfeiffer, another activist, will appear before the grand jury.

The artists who have contributed to this album reject this tyranny and stand in solidarity with those now in prison and all of those who speak out against and actively fight authoritarian, censorial and capitalist abuse.
All proceeds from this album will be sent to the Committee Against Political Repression, to legally and materially support the grand jury resisters.»

V.A. We Have Pulse 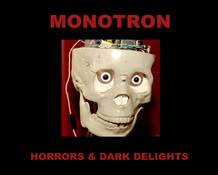 «International on-line compilation by URBAN ARTS BERLIN released on Halloween and The Day Of The Death in 2012, Germany.
All the sonic works included use Monotron Korg Synths sounds and are based on horror tales and dark delights as a theme.
We thank all musicians involved who join and produced a track for this compilation.»

in the ruined chapel the grail is bathed in light

the children are all monsters

Compilation on 'black circle records' for the Halloween 2012.
Dedicated to all little devils. Download for free.

Edition of 7 on Black Circle Records «a hand stencilled box set with five 3" CDrs with a twenty minute loop of each track, three printed folders, two inserts and a set of stickers.»

With loops from: Mortus Auris & The Black Hand, elizabeth Veldon, The White Meadows, Bird Paradigma, Noise Research Institute.
Worked on a very minimal noise track for Justin Marc Lloyd. Here's the description of the final work:
This is a compilation of minimal tracks submitted by nearly 50 different experimental artists from around the globe. These 2 to 5-layer tracks were mixed, matched and layered by Justin Marc Lloyd. Besides light mastering, none of the submitted sounds were altered during the collaging process.
Free download!
I read about the portuguese duo Sturqen on Trax Magazine. Got in contact with them and an invitation came out to produce something sound-related for the Vacu Sessions. I was into creating an original work, with experimental basslines. This is the result.
It was through Vziel Projet that I got to know that 8 Ravens was accepting submissions for a tribute to Karlheinz Stockhausen. For me, it was an opportunity to experiment with field recordings and  a weird experimental bassline. You can listen the final result in it's wholeness, I mean, 8 Ravens is a lo-bit netlabel. The track was submitted in 8 bit. Since it was not made with that detail in mind, the result was a bit awkward.

It's not my first DIY release, but I only painted CDRs. Never did it on a tape, or arranged some artwork for it. So, today I used the artwork for Anarch tune (you can listen on the Soundcloud link at the Home page) and a Maxell tape. I painted it and textured it (no spraying). Printed the artwork on my b/w laser printer and that's it. It's a prototype of course, but would be nice for a limited edition demo tape...

My first recording was made in 2008, when I finally could put up a basic sound setup. Since I'm self taught, everything concerning sound recording was a bit more hard but I did it. It's a guitar playing improvisation. Available at Bandcamp for free download. 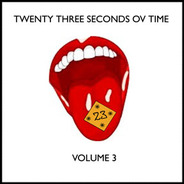 Spoken word submission made for AIN23. You can download it HERE.

CD available now. The CD is limited to only 100 copies made, each is hand numbered and includes 1 CD packaged in an LP style sleeve, with full color art on the cover and on the disc, + a track-listing insert with exclusive art.
THIS edition of 23 Seconds ov Time is a SPOKEN WORD collection.

This label has an interesting concept. I submitted another 23sec work for the next volume. Noisy one.